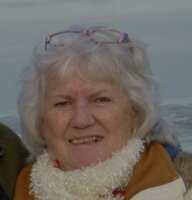 Virginia Johnson-Rollag died on July 24 one month after being diagnosed with a brain tumor (glioma). She was under Hospice care and without pain or suffering during her final days.
Virginia was born in Wilmington, North Carolina on August 12th, 1931. She loved the Carolina beaches and returned often with her daughter, Cynthia. She was an avid swimmer and runner and spent many summers as a lifeguard.
Virginia graduated with a degree in Medical Technology from St. Louis University. Thereafter, she worked as a medical technologist for close to 55 years, retiring from the Clinical Laboratory at the National Institutes of Health in Bethesda
MD. She spent some of those years on a hospital boat in the Amazon, others in a laboratory on the Navajo Indian reservation. After retiring she became a docent at the Smithsonian Zoo’s Reptile house in Washington DC. She loved to share her enthusiasm for turtles and snakes with anyone who would listen.
Birdwatching was Virginia’s favorite pastime outside of the Zoo. During her retirement years she was always eager to volunteer for community services and served in many volunteer capacities wherever she lived.
Virginia is survived by a daughter, Cynthia Ann Riegel-Schmaling and a husband, Mark Douglas Rollag.