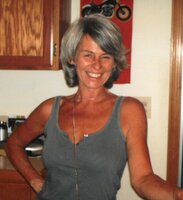 Linda Lee Puchan a sister, daughter, mother and grandmother began her walk with our Lord on August 18 2022. Linda was born in Niagara Falls New York to Ellen and Charles "Bud" West on April 30th, 1960. She then  moved to Ashtabula Ohio with her family where she was raised. After  marriage she moved to Colorado in 1979 where she ended up in Loveland and raised a family and called Loveland home since she arrived. Linda enjoyed the outdoors, Colorado wildlife, fishing, camping, gardening, and hosting for family and friends. She mostly enjoyed her time with her children and grandchildren. Linda is loved and survived by her Son and daughter in law Troy and Nicole Puchan of Loveland, grandchildren Easton, Urban, and Sutton Puchan of Loveland, mother Ellen West of Loveland, sister and brother in law Susan and John Zoretich of Ashtabula Ohio, sister and brother in law Karen and Bruce Sizemore of Ashtabula Ohio, brother Charles West Jr. of Loveland, multiple nieces and nephews and Mike Puchan of Loveland.  Linda has been proceeded in death by her son Aaron Puchan, father Charles "Bud" West, her grandparents and many loved ones. Services will be held at Bent Tree Church (1825 W 37th St Loveland, CO 80538) on Friday August 26th at 3pm.