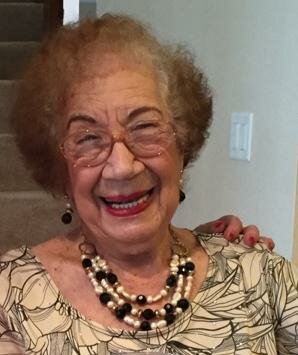 Neda Kathryn Margy was born on September 19, 1922, in the town of Denoya (aka Whizbang), Oklahoma, a ghost town now for the past 80 years.  It seems appropriate that she was born in Whizbang as anyone that knew her would say she was quite a “whizbang” herself!  Only two pounds at birth and not expected to live, Neda made sure she got the most out of the life that God gave her!

Child number five of eight born to Mike Jordan Massad & Adleada (ElKouri) Massad (and outliving them all!), Neda grew up primarily in Apache, Oklahoma where she was proud to be a butcher in the family grocery store.  She was a Massad through and through as she was a hard worker, proud of her Lebanese heritage, a devout Christian, and a true social butterfly with a real zest for life!

In the early ‘50s, her sense of wanderlust brought her to Hollywood where she soon met the handsome and charming Fred Margy, her husband of nearly 50 years. She was later blessed with two daughters, Teri and Susan.

Neda was a world traveler and loved to play games, especially card games, and was an expert Bridge player.  She was known for her excellent Middle Eastern cooking and her extravagant parties.

When, in her mid 90s, she could no longer live alone, she moved to Colorado to live with her daughter Sue, who lovingly cared for her until she closed her eyes for the last time on March 18, 2022, at the amazing age of 99.  Her larger-than-life personality will be greatly missed by all who knew her.

To send flowers to the family or plant a tree in memory of Neda Margy, please visit Tribute Store

Share Your Memory of
Neda
Upload Your Memory View All Memories
Be the first to upload a memory!
Share A Memory
Send Flowers