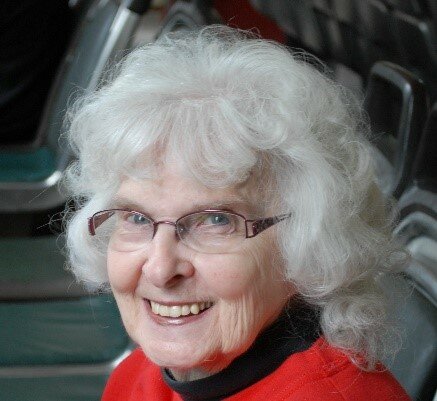 Carol Sue Johnson was born August 27, 1932 and went home to her Lord and Savior, April 20, 2022.  Carol was born in Rockford, Illinois to parents George Donald and Naomi Williams Hansen.  Carol had a younger brother, Thomas Donald Hansen, who preceded her in death.  She was baptized at the age of 12 on April 9, 1944 at Central Baptist Church in Rockford.

While living in Rockford, Carol worked for the Amerock Company making hinges and pulls for doors and cabinets.  She also spent several years working for Woodward Governor.

While vacationing in Tomahawk, Wisconsin, she met Allen Johnson and they were married in June of 1967 in Rockford, later that year, they moved to Tomahawk. The winters were brutal and cold and she hated it there, so in June of 1969 they packed up their family and moved cross country to Longmont, Colorado where she heard that it didn’t snow there!  In June of 1970 they bought a house in Berthoud. Carol had a small flower shop in Berthoud for several years, Carol’s House of Flowers.

In 1975 she and Allen built a small farm on County Road 13 in Johnstown.  She had a garden large enough to feed her family and the entire neighborhood.  She milked goats and raised chickens, turkeys and ducks and a steer or two.  She and Allen got the idea to raise hogs so they went to Iowa and bought several sows and a boar and started a farrow to finish hog farm.

In 1982 Carol and Allen divorced, sold the farm and Carol moved into Loveland.  She worked at Hack Company until her retirement.  Carol lived in Sunset Park until she was moved to Pelican Pointe Health & Rehab in Windsor where she resided until her death.

Carol is preceded in death by her parents, brother Tom Hansen and daughter Gwen Pendergrass.

Interment will be at Johnstown, CO Cemetery.

To send flowers to the family or plant a tree in memory of Carol Johnson, please visit Tribute Store
Friday
29
April

Share Your Memory of
Carol
Upload Your Memory View All Memories
Be the first to upload a memory!
Share A Memory
Send Flowers