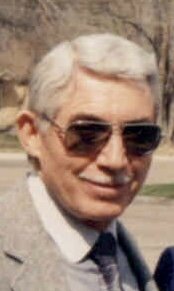 John Lobato was born on November 3, 1937, in Chama, Colorado, to Albert and Barbara Lobato. He left us to be in the presence of the Lord on June 3, 2022.  John proceeded his parents, and sister in-law, Lesley Lobato. He is survived by his wife of 60 years, Mary Ann Lobato, and daughter, Debbie Lobato from Loveland, a brother, Patrick Lobato, a niece, Audrey Best (Dennis), and a nephew, Michael Lobato, all of them are from Vancouver, Canada.

John moved to Denver when he was about 7 years old and then eventually moved to Laramie, Wyoming, where he grew up with his family.  He met the love of his life, Mary Ann, in 1958 at her girlfriend’s home.  Ever since, John couldn’t keep his eyes off her, even following her around school.  The two of them attended Laramie High School, John graduating in 1956.  Mary Ann accepted a ride home from him after school but didn’t say anything to her family.  Mary Ann’s mother mention to her that there was a nice young-, and good-looking boy working at Safeway.  Little did she know about the ridership.  So, her mom suggested that she bring him over for an introduction, for a traditional family approval.  Mary Ann’s brother, Johnny, also gave his approval beings he attended school with John Lobato.  John and Mary Ann dated for a couple of years before they got married on November 6, 1961, in Laramie, Wyoming.  In 1964, they were blessed with their daughter, Debbie, in 1964, who currently lives in Loveland, CO.

John and Mary Ann moved to Denver through a Safeway job transfer for a couple more years.  Soon after, John accepted a job with Excel Energy where he retired in 1994; he had an excellent work ethic.  When he was 8 years old, John was shining shoes on Larimer St in Denver, Colorado.  He delivered newspapers and worked in a bowling alley siting up pins.  One of the hardest jobs he took on was setting ice blocks onto the railroad cars for refrigeration. He skinned rabbits for money.  The most interesting job was walking dogs and shoveling snow for “the ladies of the night.”  His last job was working as a valet for Poudre Valley Hospital for 11 years.  John also served in the Wyoming National Guard with honors for 6 years.

After a sudden death of his mother, John was in search of spiritual insight for living. That’s when John accepted the Lord at age 37 as his savior.    Every spare minute he had, John was reading and studying the bible. Later in life, John was teaching adult Sunday School at our church, City on the Hill.  He also served as an Elder for many years. One of the great character traits about John, is that he never said anything negative about anyone.  He only saw the good in people.  He was great about helping people with marital problems, which he saw successful outcomes with them.  John went on three mission trips:  Mexico, Russia, and Honduras.  He always wanted to do a mission trip to Israel, but didn’t find the opportunity.  John had the privilege of leading his brother in-law, and father in-law to the Lord.

John loved fishing and spent a lot of time in the gym. He liked working in the yard and maintaining its beauty.  It wasn’t easy for him to talk with people unless they were talking about the bible.  John can be described as a good listener, humble, quiet, and writer. He wrote many notes about the family and really knew how to express himself.

John first started showing signs of Parkinson’s disease in 2016 and eventually diagnosed and finally scummed by this dreadful illness.

Debbie Lobato described her father as “a man of little words.  Growing up, we didn’t talk much to each other, or show much affection.  So, I did not know much about him other than a few stories.  I do know this, that I am a lot like him; quiet, good listener, hard worker, and doing good for others.  That is what I learned from watching him.  He loved studying the bible and the book of Revelation.  In the past years I have gotten interested in the book of Revelation and it would have been nice to have studied with him.  When we moved to Fort Collins, we went fishing on Thursdays on my days off, which was fun.  But I’m grateful for what he had done and provided for me.  I would not have what I have now if it was not for him.  I am so thankful for him.  So, Dad thank you for all that you provided for us, for being a good father, and husband.   You had a great spirit about you.  We will be okay, and we will see you soon.

John leaves a legacy of having a big heart with the love and compassion for others, and more importantly, The Lord as his Savior.

To send flowers to the family or plant a tree in memory of John Lobato , please visit Tribute Store
Saturday
25
June

Following after the service.