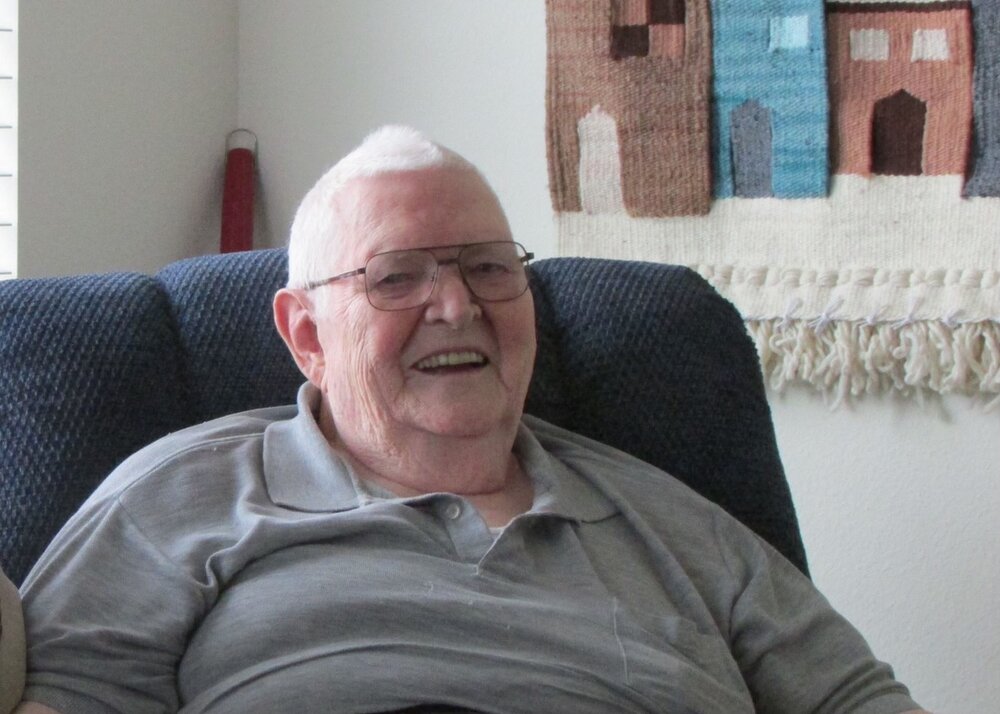 Edward John Engel of Loveland, Colorado, passed away peacefully on Aug 11, 2022, at Loveland Good Samaritan Village. He was born in Manchester, South Dakota on November 9, 1927.

Ed grew up in eastern South Dakota, near Harrisburg and Emery. When he was 17, he enlisted in the Navy and was assigned to the Navy Construction Battalion—better known as the Seabees. As part of his military service that coincided with the end of WW II, he spent time in Guam building roads.

He met Frances Rosalie McDonald, in the fall of 1951, at the Arkota Ballroom in Sioux Falls, SD. They were married in DeSmet, SD, on April 17, 1952. They lived in Sioux Falls for more than a decade until they moved to Loveland. Ed worked in the mechanical building trades prior to starting a long career path at the Fort Collins Woodward Governor.

Ed and Rosie were long-time members of St. John the Evangelist Catholic Church beginning when they moved to Loveland. They were also active members of the American Legion.

For a few years after retirement they wintered in the greater Phoenix area. Subsequently, they decided to move to Apache Junction, AZ, and spent two decades there. They relocated back to Loveland in 2016 to be in closer proximity to family.

Ed and Rosie enjoyed big band dancing in their early married years but came to love polka dancing the most. They were members of the Polka Club of America for several decades, forming many friendships while working and dancing at polka festivals around the country and in Canada.

He is also survived by siblings: Al Ernster of Colorado Springs, CO; Janet Wendt of Fort Collins, CO; as well as Annabel Hoffman, Glenn Ernster, Eugene Ernster, Jim Ernster, and Marlys Elliott—all of South Dakota. He was predeceased by his beloved wife of 68 years, Rosie; and son Jerry and daughter Lisa.

Viewing and rosary/vigil prayer service will be held at Viegut Funeral Home on Tuesday, Aug 16, 2022, from 4:00 p.m. - 7:00 p.m. A Mass of Christian Burial is scheduled for Wednesday, Aug 17, 2022,10:00 a.m., at St. John the Evangelist Catholic Church, followed by the graveside service. There will be a reception in the Bread of Life Hall of St. Johns afterwards.

To send flowers to the family or plant a tree in memory of Edward Engel, please visit Tribute Store
Wednesday
17
August

Share Your Memory of
Edward
Upload Your Memory View All Memories
Be the first to upload a memory!
Share A Memory
Send Flowers