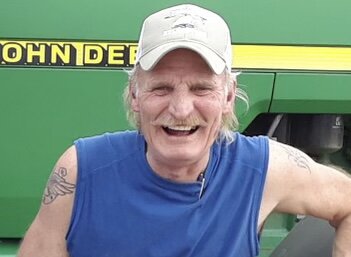 Ronald was baptized on April 28, 1957. He received his Confirmation of Faith April 25, 1971 from Immanuel Lutheran Church in Loveland, Colorado. After his high school graduation from Roosevelt High School in 1975, Ronald spent a short time studying agriculture at Colorado State University before returning to the family farm in Johnstown, where he farmed with his father and cousin, Justin Starck, for many years. He married, and later divorced, Kelly Yonker (Starck).

Ron, as he was known by many, had a passion for farming, was a muscle car collector, and  Harley enthusiast. He had an eye for style: including everything from fast cars to tractor hubcaps. He was a caring uncle to his nieces and later great nieces and nephews. Growing up in Johnstown, Ronnie had many lifelong friendships.

He is survived by his sister, Cynthia Jo Starck of Fort Collins, his nieces Veronica Ray of Farson, Wyoming, and Whitney Starck and Deidre (Kevin) Lock of Fort Collins as well as three great nieces and two great nephews.

He is preceded in death by his parents, Virginia and Robert, and his grandparents Daniel and Rachel Sauer and Emil and Victoria Starck.

In lieu of flowers, donations in honor of Ronald Starck can be made to Immanuel Lutheran Church.

Rejoice in the Lord Always. I will say it again, Rejoice. Philippians 4:4

To send flowers to the family or plant a tree in memory of Ronald Starck , please visit Tribute Store
Wednesday
7
September

Share Your Memory of
Ronald
Upload Your Memory View All Memories
Be the first to upload a memory!
Share A Memory
Send Flowers