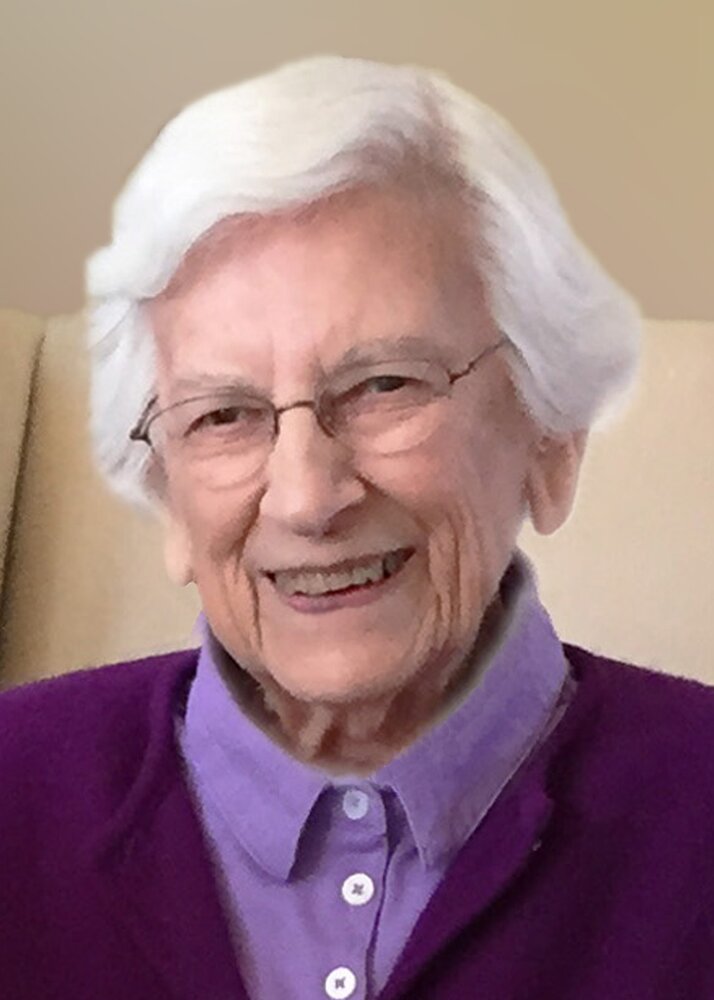 Esther Alma Hellerman was born November 4, 1919, in Marshfield, Wisconsin, the fifth and youngest child of Otto Karl Hellerman and Emma Caroline Thom.  When she was five years old, her family moved to Mankato, Minnesota, where her father was principal and teacher at Immanuel Lutheran School.  She graduated from Bethany Lutheran High School in Mankato in 1937 and went on to graduate from Bethany College in 1939.  Esther accepted a call from Zion Lutheran School in Sanborn, Minnesota, where she taught the primary grades.  It was here that she met her husband, Virgil Radtke.  She enjoyed a carefree time and made lifelong friends in the period before the war.

By 1943, Virgil was in the Army, stationed at Fort Dix, New Jersey.  Esther moved to New York and took a secretarial job at LaGuardia Field.  They were married on June 5, 1943, at St. Peter’s Church in Brooklyn.  Seven months later, Virgil shipped out to fight in Europe, and Esther returned to Minnesota and waited for the war to end.  Virgil returned safely in July 1945, but his 4th Infantry Division was slated to go to the Pacific War Zone.  He was sent to Camp Butner, North Carolina.  Esther lived in Durham and worked at Duke University Medical Center.

With the surrender of Japan, the war ended, and the couple began their life together in Minneapolis.  Esther worked while Virgil attended broadcasting school in St. Paul.  When Virgil got his first job in radio at station KBUR, they went to Burlington, Iowa.  In January 1948, they moved to Faribault, Minnesota, where Virgil began a 16-year career with radio station KDHL.

Esther and Virgil became the parents of three children, Christine, Mark and Joel.  As Minnesotans, Esther and Virgil took every opportunity to travel in the West.  In 1963, they moved the family to Loveland, where Virgil began work at radio station KLOV.  They became members of Immanuel Lutheran Church, where they made many good friends.  In the 1970’s and 80’s, Esther and Virgil were the owners of Greentree House, a small business that made Christmas ornaments.   Besides managing the business, Esther was a volunteer at McKee Medical Center for more than 20 years.  And she enjoyed gathering her family around the table every Sunday night for good meatloaf and good conversation.

Esther and Virgil were married nearly 73 years when he passed away on May 27, 2016.  She is survived by her children, Chris and husband Chuck Ulfers, Mark Radtke, and Joel Radtke.  Her grandchildren are Amy Dunstan and husband Chris and their children Emma, Elizabeth and Charlie; Benjamin Radtke and wife Valerie and their daughters Katelyn and Samantha; Peter Ulfers and wife Angela and their children Abby, Laura and George; and Travis Radtke and his daughter Natalie.  She lived to know her great-great-grandchildren, Katelyn’s sons Tyler and Malik.

Esther is also survived by her sister-in-law Marjorie Hemphill, of Menifee, California.  She was preceded in death by her brothers Paul, Karl and Robert Hellerman, and her sister Ruth Hellerman Runge.

In lieu of flowers donations can be made to the Immanuel Lutheran School, 4650 Sunview Dr. Loveland, CO 80538.

Funeral service will be Monday October 24, 2022 at 10:30am at Viegut Funeral Home with a reception to follow at Viegut Reception Center. Private burial.

To send flowers to the family or plant a tree in memory of Esther Radtke, please visit Tribute Store
Print
Monday
24
October