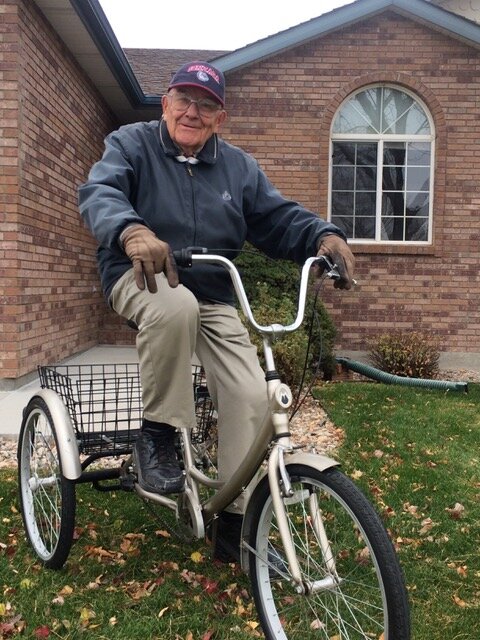 Don was born on May 22, 1929 in Mobridge.  His mother, Mabel was the manager of the Women’s Ready to Wear Department at the local JC Penney Store in addition to owning her own drapery business.  Don’s father, Adolph was employed by the Sackreiter Concrete Company.  Don excelled in school and was the Valedictorian of his senior class in 1947.  Music played an extremely important part in Don’s life and he was an accomplished alto saxophone player and member of the jazz band, “Halsey Hall”.  The jazz band played for numerous events throughout northern South Dakota and was known for being one of the best dance bands around.   During high school, Don also worked part time at Perron’s Toggery Fine Men’s and Western Wear in Mobridge.

In 1951, Don was drafted into the Army and completed his basic training at Fort Sill in Oklahoma. For two years, Don served his country during the Korean War as a Sergeant in the First Field Artillery Observation Battalion.  It was on October 25, 1951 while on furlough, that Don married his high school sweetheart, Virginia Larson. Following an honorable discharge from the army, Don returned to Mobridge and was employed full time by Perron’s Toggery.  In 1969 Don and Donald Perron purchased the business from William Perron.  The establishment flourished under Don’s careful management and was known throughout the state as one of the finest men’s clothing shops around.  Growing up in Mobridge, Don knew all the farmers and ranchers and would often open the store on his only day off (Sunday) to accommodate their schedules.  His attention to detail and to exemplary customer service was appreciated by all the store’s patrons.

In 1984, Don sold the store but elected to stay on for a time to assist with the transition.  Even though Don retired from Perron’s in 1987, he did not stop working!  He was employed by two different businesses in Mobridge, Vojta Furniture and Larson’s Funeral Home.  Because of his close ties throughout the state Don was well liked and trusted by thousands of people.  Don could easily start up a conversation with someone from South Dakota and they would have mutual friends or know the family name of Baum.

Throughout his life, Don was a hard worker but did take time to play golf at the Mobridge Country Club.  He instilled a love of golf in his son, John, who went on to play competitively for the University of New Mexico and then briefly on the mini tour.  In the summers Don and Virginia would vacation in the Black Hills.  It was there that daughter Pat developed a passion for hiking, climbing and being in the mountains.  Don and Virginia relocated to Loveland, Colorado in 2006 in order to be closer to Pat, Tom, Alexandra and Mike.  They made regular trips to Albuquerque New Mexico to see their son, John and his wife Cathy plus watch their grandson Matthew, another golfer in the family.

Don’s family would like to acknowledge the many dear friends in the Seven Lakes neighborhood of Loveland who have added quality and joy to Don’s life.  In addition the family is greatly appreciative of the care delivered to Don in his final weeks at North Shore Nursing Home and also the outstanding professionals of Pathways Hospice.  A celebration of Don’s life will be held at a later date.

To send flowers to the family or plant a tree in memory of Donald Baum, please visit Tribute Store

Share Your Memory of
Donald
Upload Your Memory View All Memories
Be the first to upload a memory!
Share A Memory
Send Flowers