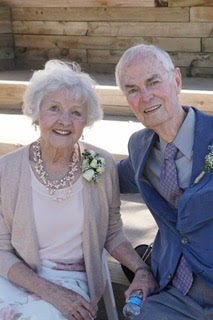 Ed was born in the family house near Craig Missouri on March 18, 1931 to Edward and Verna Doebbeling. His parents were farmers along the Missouri River, and Ed did everything from hunting squirrels to harvesting corn.  He attended a one room schoolhouse with one teacher for his first 8 grades. He loved playing basketball and football during high school.

Ed attended UNC in Greeley, CO for two years starting in 1949. During the summer of 1950, he met Mary Olive Manly in the reserve section of the UNC library where she was working. They fell in love and enjoyed square dancing and going to outdoor concerts. Shortly after the start of the Korean War, Ed enlisted in the Navy and served on a destroyer for four years. Ed and Mary got engaged in December 1955, and tied the knot in March 1956 in Kansas City, MO. That summer, Ed started working for State Farm Insurance after his wife helped him with some networking. Ed worked for State Farm for 37 years in Columbian MO, Bloomington IL, and Greeley Colorado. In Greeley, Ed was Director of Management Planning from 1969-1992. His oldest two children, Brad and Julie were born in Columbia, Missouri, Brian was born in Bloomington, Illinois and John was born in Loveland, CO.

Ed was active in Toastmasters and won several awards for speaking. After retiring, he was active in the Lions club as served as District Governor. He enjoyed studying the Bible and was active in Bible Study Fellowship. Ed and Mary lived on a ranch in south Loveland and raised Appaloosa horses for several years. They lived in Glen Haven from 2011 to 2013. They had to be evacuated by helicopter during the flood of 2013, when they moved to Fort Collins.

Ed and Mary traveled around the US visiting their children and grandchildren in Iowa, Minnesota, Florida, Texas, and Indiana. They visited their son Brian and his family in Switzerland, Mali, and Germany ten times from 1988 to 2011. After these trips, they took in the sights of England, Scotland, Wales, the Netherlands, France, Italy, Belgium, Austria, and Denmark.

To send flowers to the family or plant a tree in memory of Edward Doebbeling, please visit Tribute Store
Sunday
27
November

Share Your Memory of
Edward
Upload Your Memory View All Memories
Be the first to upload a memory!
Share A Memory
Send Flowers