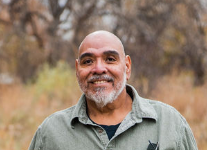 Butch was born on February 3, 1961 to Louis and Mary Ann (Annie) Ramirez. After graduating from Loveland High School in 1980, he attended Aims Community College where he received his Associate in Applied Science Criminal Justice degree. He successfully completed the Law Enforcement Basic Training Course in 1984.  He worked as a Community Service Officer for a short time before deciding police work was not the path he wanted to follow. He worked on a paving crew for several years before he was hired by the City of Loveland in 1989. While employed with the city, Butch worked as a Plant Operator at the Water Treatment Plant where he was a dedicated employee for 33 years.

Butch loved sports and spending time with family. He was devoted to attending his step sons’ sporting events. There were many Saturdays where he would get home from work at 7 a.m. and sacrifice sleeping so he could go watch their games. He continued the same tradition for his grandchildren. He was proud of his grandchildren and made sure to spoil them all! Butch was a kind, loving man with a big heart. He made friends easily and will be missed by many.

Cremation has been completed. Services to honor and celebrate Butch’s life will be held at Grace Place, 375 Meadowlark Dr., Berthoud CO on Friday, December 9th at 2:30 p.m.

To send flowers to the family or plant a tree in memory of Michael Ramirez, please visit Tribute Store
Friday
9
December