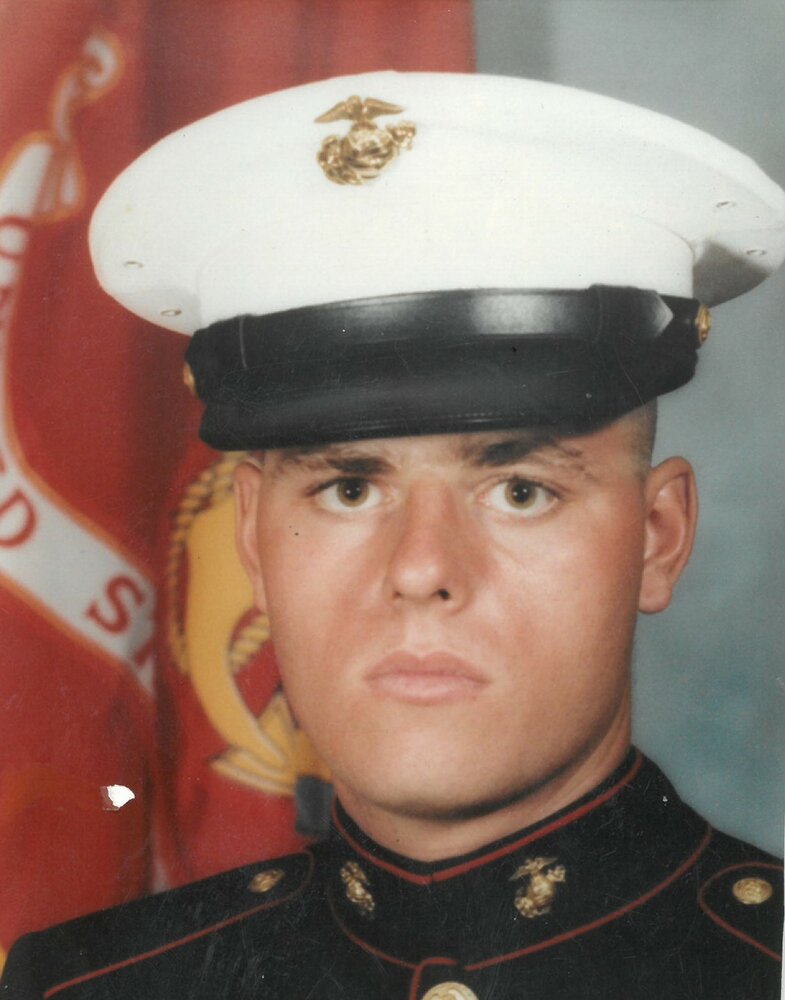 Michael James Goddard, born October 18, 1967, was the son of the late Jerry Goddard and Evelyn Goddard and was proceeded into life by his twin sister Michelle Zeitlow. He departed this earthly life peacefully due to his yearlong battle with leukemia on Friday, Dec 2, 2022, at the age of 55.

He is survived by his loving wife Dawn Goddard, Loveland, CO as well as his mother Evelyn, twin sister Michelle and extended family in Las Vegas, Nevada.

Growing up, Michael was always a proud patriot American. He enlisted into the Marine Corp in 1985 at the age of 17.  After graduating from Wiggins High School in 1986, he left for boot camp to Camp Pendleton.  He was later stationed at Camp Lejeune and went on to serve 4 years as a Marine.  Once a Marine always a Marine. Forever keeping in touch with those in his platoon. SEMPER FIDELIS

After his enlistment was over, he took on his second favorite job following in his dad’s footsteps in welding, asphalt road construction, truck driving, drilling caissons, and concrete.  He was a big boy who loved big toys.  Western Mobile Highway Paving in 1995 is where he met his best friends, Gil and Debbie Uhrich. He worked on and off with them thru the years until his passing.

Michael also had great respect for his elders and took a 12-year coffee break from construction, delivering home care medical supplies, and transporting the elderly and disabled to their various destinations.  His spirit and compassion really shined through during those years.

In his continuing support of America and the Military, he would celebrate every Marine Corp birthday November 10th wearing red and rise early on the 11th to ring his bell for the VFW on Veterans Day’s.

On August 23,2005 Michael met his future wife, Dawn Goddard. They were married August 18, 2007. The next fifteen years they spent time with close family and friends doing the things he loved most; fishing, playing cards, long boat rides on the lake and celebrating his favorite holiday, Halloween by dressing up in his crazy clown outfits.

Michael was diagnosed with leukemia in January 2022.   With his loving, caring wife constantly by his side, he fought his toughest battle.  He was never discouraged or self-pitying.  Because he was the best of the best kind of person, the support flowed into him from family on all sides, old and new friends, and his brothers from the Marine Corp.  Michael was released to go home from hospital on November 23, 2022, to have Thanksgiving and live out his days. Michael was blessed to have the time to say goodbye to his wife, mother, twin sister, extended family and friends.  Everyone’s thoughts and prayers were greatly appreciated by him and his wife. He peacefully lost the battle December 2,2022 at his home.  By his side was his wife Dawn, friends Gil and Debbie, holding his hands at the end.  He will be dearly missed.

He is back to being a “BOOT” and standing among heroes. Guarding the streets of heaven.   He would love to be remembered with funny, strange, or silly stories that celebrate what was good and blessed in his life.

To send flowers to the family or plant a tree in memory of Michael Goddard, please visit Tribute Store