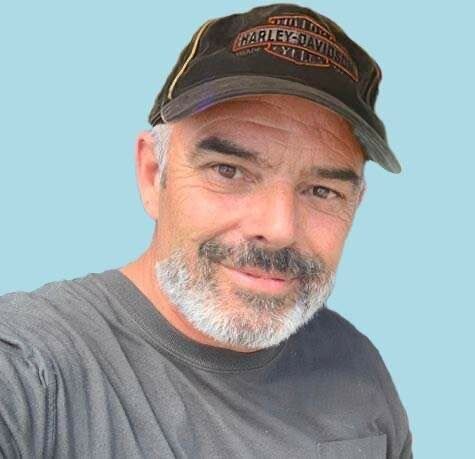 On January the 13th, 2023, Jimmy Beierle left this earth and cruised into heaven on his Harley Road King.   James’s “Jimmy” Beierle was born on October 25, 1966 in San Jose, California to Deborah Leard and James Addington Jr.

Along with his mother and his step-day Ike Beierle the family moved to Basin, Wyoming in 1977.  While in school he was active in 4H club and sports, and developed a lifelong love of working on motorcycles, classic cars, and trucks.   Jimmy left Wyoming for new adventures in California and then went on to Texas where he ran a successful air compression business.  He then learned and mastered the trade of abatement work.

After exploring other states, he eventually returned to the state he loved most.  Here he made his forever home in Burns, Wyoming.  Jimmy was a smart businessman who for many years owned and operated a very successful business, Big Horn Contractors.

He enjoyed camping, hunting, fishing and 4 wheeling with his friends and family in the mountains of Wyoming.  He was an outgoing person who easily made many friends along the way.  Jimmy lived large, loved hard and rode fast!  He had a love for animals and raised dogs and horses throughout his life.

He had 2 daughters, Ciera, and Stephanie whom he loved very much.  He always cherished the time he spent with them and did all he could to be a good father to them.

In his spare time, he enjoyed working with his hands, rebuilding cars, trucks, and bikes.  He had a passion for Harley Davidson Motorcycles and owned many of them over the years.  He was also an amazing artist, designing many of his own tattoos.

On May 9, 2014, he married the love of his life Cassidy – and with that union he also gained a third daughter, Rietta who he also loved very much.  Together Cassidy and Jimmy went on many adventures including biking across the US, attending several Sturgis Motorcycle rallies and spending many weekends riding their bikes across Wyoming and Colorado.

He was recently preceded in death by his mother-in-law Mary Harman with whom he had a very special bond. Also, by his step-father Ike Beierle in 2015.

In recent years he battled and overcame several health issues.  He fought his most recent battle like a true biker, nearly winning over nearly impossible odds.  He is survived by his wife Cassidy, his mother Deborah Beierle, his daughters, Ciera, Stephanie and Rietta as well as his granddaughters Paisley and Kinslee and his sister Shelley (Tom), many cousins and friends.  He is also survived by his best friend Bruce Wilson.  He passed away surrounded by his family and friends, holding the hand of his forever true love, Cassidy, who misses him every second of every day.  He will be wildly missed forever by all those who were fortunate enough to know him. We love you BIG Jimmy!

A memorial service will be held at a later date.

To send flowers to the family or plant a tree in memory of James Beierle , please visit Tribute Store

Share Your Memory of
James
Upload Your Memory View All Memories
Be the first to upload a memory!
Share A Memory
Send Flowers